The Miracle of Forgiveness

The Miracle of Forgiveness by Spencer W. Kimball
....was written in 1969.  It was written while Kimball was a member of the Quorum of the 12 Apostles.  Kimball later became the President of the LDS Church.  The book was reprinted by the church while Kimball was Church President giving it an even more official status.   The book is still sold by Deseret Book. 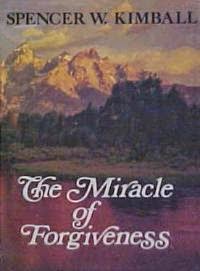 The book has been a source of controversy.

A few of the most controversial quotes:
"Your virtue is worth more than your life… preserve your virtue even if you lose
your lives… do not permit yourselves to be led into temptation"

“…one should give his or her life rather than to yield to loss of virtue."

"Also far-reaching is the effect of the loss of chastity. Once given or taken or stolen it can never be regained. Even in a forced contact such as rape or incest, the injured one is greatly outraged. If she has not cooperated and contributed to the foul deed, she is of course in a more favorable position. There is no condemnation where there is no voluntary participation. It is better to die in defending one's virtue than to live having lost it without a struggle."

As I was riding along the road on my mule I suddenly noticed a very strange personage walking beside me.... His head was about even with my shoulders as I sat in my saddle. He wore no clothing, but was covered with hair. His skin was very dark. I asked him where he dwelt and he replied that he had no home, that he was a wanderer in the earth and traveled to and fro. He said he was a very miserable creature, that he had earnestly sought death during his sojourn upon the earth, but that he could not die, and his mission was to destroy the souls of men. About the time he expressed himself thus, I rebuked him in the name of the Lord Jesus Christ and by virtue of the Holy Priesthood, and commanded him to go hence, and he immediately departed out of my sight....