The Mathematics of Polygamy

If the numbers of men and women in a community are about even....

If the number of wives a man has is directly inked to entering Heaven and their status there, it is important to create opportunities to acquire more women.

I have found at least ten things that 19th Century Mormons did to offset the math.

3. Allow some missionaries who were already married to date and find new wives on missions,

7. Threaten men if they dated some girls and even kill and castrate.

8. Excommunicate men for small offenses to push them out of competition.

9. Allow wealth to accumulate in the hands of leaders.

10. Push young couples out of Salt Lake to other settlements so that leaders got first pick of immigrant women.

Joseph Smith is a Sexual Predator

Brigham Young had a favorite wife

Who is keeping the law of chastity? 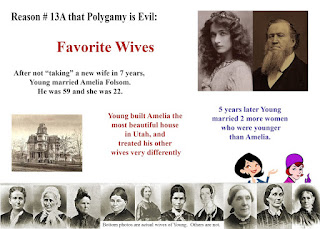