Joseph goes like a lamb to the slaughter
Another error in the LDS "Church History Primary Manual". 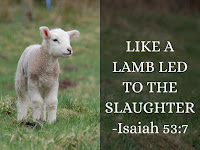 From the Primary Manual Lesson 37.
Joseph knew that if they went back they would be killed, but he told other Church leaders: “I am going like a lamb to the slaughter, but I am calm as a summer’s morning. I have a conscience void of offense toward God and toward all men. If they take my life I shall die an innocent man, and my blood shall cry from the ground for vengeance, and it shall be said of me ‘He was murdered in cold blood!’”


The lesson gives the false impression that Joseph was a quiet simple man that was quick to turn himself in.

Another Church History Book paints a different picture:
The Saints Chapter 44 - written in 2018

“It is thought by some that our enemies would be satisfied with my destruction,” he said, “but I tell you that as soon as they have shed my blood, they will thirst for the blood of every man in whose heart dwells a single spark of the spirit of the fullness of the gospel.”
Drawing his sword and raising it to the sky, Joseph urged the men to defend the liberties that had been denied them in the past. “Will you all stand by me to the death,” Joseph asked, “and sustain, at the peril of your lives, the laws of our country?”
The truth is that he went to his death swinging.  We do know that he had a gun smuggled into his jail cell and that he shot at six times.  Some sources say that two men died from the gunshots, but it isn't certain.
It is also questionable if Joseph really thought he would die.  He had been remarkably resourceful in the past at getting out of tough situations and he did have the assurance that Governor Ford would protect him.


No comments:
Email ThisBlogThis!Share to TwitterShare to FacebookShare to Pinterest

Criticizing the Prophet will get your horse killed by God.

Sylvester Smith’s Horse Dies because he criticizes the Prophet

The Zion’s Camp expedition was struggling. Food and water were short or contaminated. The weather was extreme. The men were fighting each other and many were blaming Joseph Smith for their suffering. A man named Sylvester Smith was very angry with The Prophet. Joseph rebuked Sylvester and the other men. Almost every horse got sick. The men repented of their complaining. Every horse got better, except Sylvester Smith’s horse, which died.

Why it is wrong:

The purpose of the lesson appears to be:
Argue against authority at your own peril.

The fact is that the expedition was horribly planned. Even though Joseph Smith had months to prepare. They didn’t take nearly enough provisions or money and their equipment was poor. The horses were suffering more than the men and often went days without adequate or clean water. It isn’t surprising that the men complained and that a horse died.

The lesson oversimplifies that if you disagree, your horse will died. When there are so many other factors to consider. This also creates a modern church culture that even if the criticism of a leader is justified, you should still not complain.