Did Thomas S. Monson Really Speak at Every one of "His 85 Widow's" Funerals?

Following the death of President Thomas S. Monson, the Mormon Church stated that Monson had attended ALL 85 funerals of the widows who had been in his ward when he was a Bishop.

“Although his Church callings and responsibilities over the years have often taken him on the road for weeks at a time, President Monson made it to every funeral of his widows and spoke as he had promised them he would. “.

In this article, I contend that it isn't true.

In about 1956 we recognized that our neighborhood was dete­riorating. We observed this one Halloween by the nature of the people who came in the guise of ‘Trick or Treat.’ The minority elements were moving into the area where we lived, and many of the old-time families had long since moved away. Seeking coun­sel, I visited with Mark E. Peterson, who for many years had been the General Manager of the Deseret News. O. Preston Robinson, my former professor of marketing at the University of Utah, had suc­ceeded Brother Petersen as the General Manager at the News. As I mentioned to Mark my dilemma, wondering if it would be unfair for me to move, he said simply, ‘Your obligation to that area is concluded. Why don’t you build a house in my ward?’” (On the Lord’s Errand: Memoirs of Thomas S. Monson, 1985, p. 184).

Why does it matter?  Because the truth is important and the "One True Church" should not lie.

While he was away on assignment in Europe for months at a time as an Apostle were there no funerals?

Some articles have said that many of the widows were from World War II soldiers.  That would mean the women could have been about  Monson's age.   Are some still alive?

" He promised to speak at their funerals - All  Eighty-five - and he made it to everyone, though he sometimes had to slip out of a meeting or fit the service in between general conference sessions."


I contacted the LDS Church History Library and they said the following:

Thank you for your inquiry. President Monson himself talked about this. It is written in his biography To the Rescue, written by Heidi S. Swinton on page 142. The page is attached.


I contacted the Author of his biography.  Heidi Swinton.  I wrote her the following note:

Sister Swinton, in your biography of President Monson you say, “ he promised to speak at their funerals, all eighty-five, and he made it to every one.” You don’t list a source for that statement. Where does that information come from?

Her response: "Directly from him". I hope this helps.
Link to Ensign Article

Well no, Church History Library people, a Biography is not the same as an Autobiography, and the biography you cite does not quote President Monson, it states an unverified story.

Further Edit:  The more I research here the more I feel like it is another case of story embellishment.  I think it may be related to this talk by Jefferey R. Holland from 1986.

"Furthermore, these sweet folks never seem to die until Brother Monson is back in town from his many assignments, enabling him to speak at their funerals. Perhaps no one in the present leadership of the Church has spoken at so many funerals—he once had three services in one day."

Although this quote by President Holland doesn't specifically say he spoke at Every Single funeral, I can see how the Monson Biographer might have taken it to mean that.  Of course, this quote was from 1986.  More than 30 years before President Monson's death.

A TIMELINE of President Monson's that might help clarify. 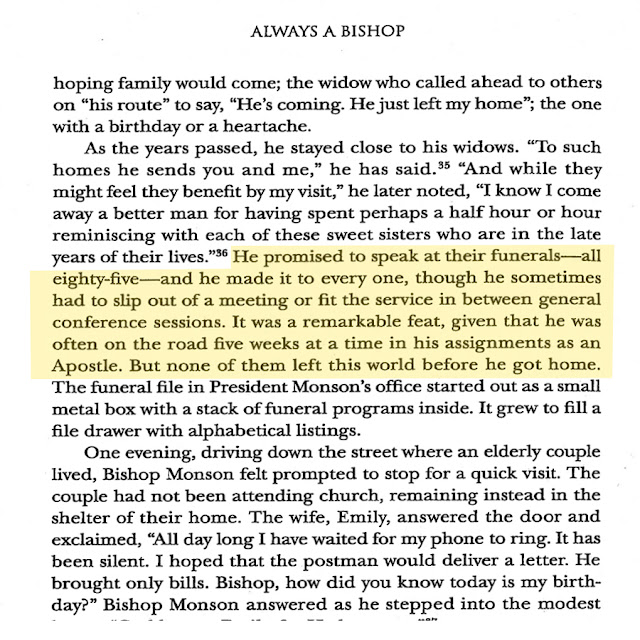 Talk by Thomas S. Monson in 1981 where he talks about visiting widows.

Article about being Mission President in Canada

Monson by the Numbers

USA Today Obituary says, "he was a spiritual leader for about 1,000 church members, including 84 widows, many whose husbands had died in World War II."

Many of the widows were from World War II soldiers.  That would mean the women could have been about his age.   So some may still be alive.

2008 Ensign Article by Jefferey Holland.  For some reason this has been wiped from LDS.org
(Jun 2008)

"He continued visiting them in their declining years and, somewhat miraculously, has been able to speak at each of their funerals-all 84 of them!"  This is the oldest reference I can find to the story.

Furthermore, these sweet folks never seem to die until Brother Monson is back in town from his many assignments, enabling him to speak at their funerals. Perhaps no one in the present leadership of the Church has spoken at so many funerals—he once had three services in one day—and always very personal remarks are given for the sometimes ordinary and otherwise unknown souls that he has met and loved somewhere during his ministry.

When Jefferey Holland said these words it was 1986.  It was only 37 years since he was put in as Bishop.  If he really had war veterans widows, they would only be

Interesting that it says, "One way that this attribute became part of his life was in the way he served the 84 widows in his congregation while he was a young bishop and for decades afterward. He said that they all asked him to speak at their funerals, assignments he was happy to accept notwithstanding heavy travel and other commitments."  Somebody on Wikipedia gave this quote as a reference for the fact that he spoke at every funeral.

From 2008 Biography Book about the Prophets. 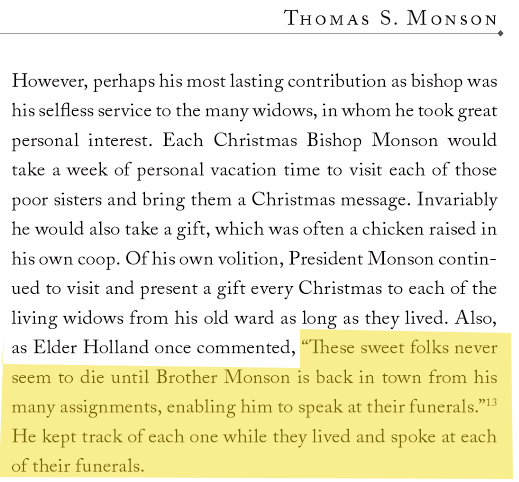 References 1986 by Jefferey Holland almost implying that he spoke at every funeral, the book takes it one step further and says he spoke at each of their funerals.


Obituary Article from The Blaze
In 1949, he served as a bishop for two Salt Lake City congregations leading about 1,000 church members. More than 80 were widows whose husbands died in World War II. He regularly visited each one and promised to speak at their funerals one day, according to Religion News.


Sister Swinton, in your biography of President Monson you say, “ he promised to speak at their funerals, all eighty five, and he made it to every one.” You don’t list a source for that statement. Where does that information come from? "Directly from him".

I know that nobody in Church Leadership cares about my opinion, but as an active, tithe paying member I say that..... 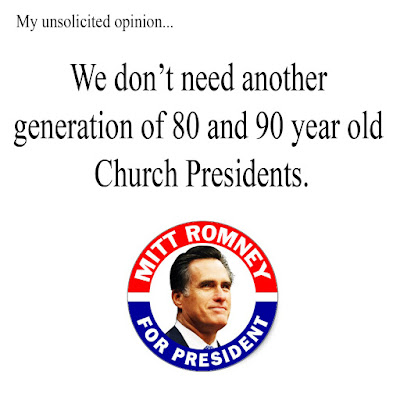 Romney is qualified, faithful and would give the church positive exposure.  It would be a win, win for everyone but Bednar.  If the Law of Common Consent is really a thing, can "we" as a united membership, nominate him?