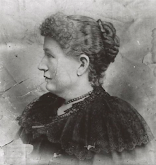 Sarah Ann Briggs was a survivor of the Martin Handcart Tragedy.

She also is another example of the Mormon exploitation of young girls.

She lost her father and two sibling in 1857 to cold and starvation in the handcart tragedy.  In 1860 her mother died from a scorpion bite.

As an orphan at age nine she was sent to be raised by a step sister and her husband George.

For five years she was raised as their child but at the age of 14 years and 10 months she was married to George as his second polygamous wife.

Ten months later at age 15, she had her first child.

She had four children by age 22 when George died and she was left with four young children.

By age 33 she had left the Mormon church and married to an Episcopal Dentist.  There is some evidence that her children were taken from her when she left the LDS Church.