In the vicinity where I lived and served, we operated a poultry project. Most of the time it was an efficiently operated project supplying to the storehouse thousands of dozens of fresh eggs and hundreds of pounds of dressed poultry.

Many may know that young Bishop Monson took a week of his personal vacation time every Christmas season to visit all of those eighty-five widows in his ward. Many may not know that for the first several years the gift he would take them was one of the Barred Plymouth Rock or Rhode Island Red hens raised and dressed out by him in his own poultry coops. And although it has been more than thirty years since he was released as their bishop, President Monson has taken a gift and visited every one of those widows every Christmas for as long as each has lived.

In 1994 Jeffery R. Holland version Jeffery Holland added two widows and add the fact that Monson left gifts purchase from his own pocket.

"Nearly all of those eighty-seven widows are gone now, but their “bishop” kept visiting them to the end. One night during the Christmas holidays some years ago, President Monson was making his customary rounds to “his” widows, leaving gifts purchased from his own pocket, including plump dressed chickens that were, in the early years, raised in his own coops."

How Long Does it Take to Kill, Skin and Cook a Rabbit ?

Two questions to think about before reading this story:

1. How long does it take to kill, skin and cook a rabbit by somebody who has never done it?

2. Does the family below look like they have never tasted chicken?

"One year, the home was buzzing with Thanksgiving preparations when Charlie Renshaw, a friend from over the back fence, stood outside, as was the custom of these young friends, and hollered, “Tom-my!”
.... “It sure smells good in there. What are you eating?”
Tommy told him it was turkey, and Charlie asked what turkey tasted like.

Tom responded, “Oh, about like chicken,” to which Charlie asked, “What does chicken taste like?”
Tom ran into the kitchen, snatched a piece of breast meat, and handed it to his friend. “That’s good!” the boy said.
When Tom asked what Charlie’s family was having for dinner, the answer was, “I dunno. There’s nothing in the house.”
Tom pondered. He knew his mother always found something to feed those who came to the door. He had no extra turkeys, chickens, or money. But he did have two pet rabbits, a male and female, the pride of his life, beautiful New Zealand whites. He motioned to his friend and headed for the specially constructed rabbit hutch built by one of his uncles. He reached in and grabbed his two pet rabbits, put them in a gunnysack, and handed the bag to Charlie.
“Rabbit meat tastes better than chicken,” Tom said. “Their hide makes really good knuckle pads when you are playing marbles. You know, you can sell the hides for a quarter each over at the hide company. These two rabbits will give your family a good dinner.”
Charlie was on the fence—the boys used the fences like sidewalks in his neighborhood—and heading for his yard before Tom could close the door to his empty rabbit hutch. He realized he had given all he had. He had met someone else’s need and did not regret it. The pattern was in place: “I was an hungred, and ye gave me meat. . . . Inasmuch as ye have done it unto one of the least of these my brethren, ye have done it unto me.
His life has continued to be a tangible expression of the Lord’s words.”
He gave his 2 pet rabbits to a neighborhood friend who’s family was not going to have a turkey for Thanksgiving.
More questions to think about this story:
1. Wouldn't Tommy's mother have just invited the family to dinner?
2. How many people would be willing to kill a rabbit?
3. Do you think the Renshaw mother would have talked to Tommy's mom before butchering the rabbit?
4. How long would it take to kill, skin and cook a rabbit?


Many Latter-day Saints have heard President Monson tell a Christmas story about his own toy train, and giving a train car to a less-fortunate friend in the neighborhood. Another Christmas story he wrote about involved two rabbits that he gave to a friend who — when asked what his family was having for Christmas dinner — said he didn't know, and had never tasted chicken or turkey.
He later wrote that he shed tears as he put two of his own rabbits in a bag for his friend, "but there was a warm feeling in my heart (later) ... when he told me this was the best Christmas dinner he and his family had ever had." Ensign, December 1995
Even Less believable Desnews version

The Mormon Church has stretched the truth so much that it calls into question, every story they have ever told. 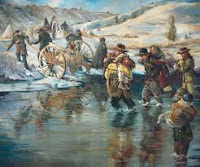 "Then three eighteen-year-old boys from the relief party came to their rescue. George W. Grant, David P. Kimball, and C. Allen Huntington plunged into the icy water and began carrying people across the river. They made many trips and carried almost the entire company across.
The cold water caused health problems for the boys, and years later all three died from these health problems. When President Brigham Young heard what these three boys had done, he wept. He later said that this act alone would ensure the three young men places in the celestial kingdom."

Since at least 2006 the LDS Church has known that the basic facts of the story are false:

a. None of the young men were 18 years old.
b. There is little evidence that any of the men died as a result of the act.
c. Brigham Young has no right or knowledge if they earned their places in the Celestial Kingdom.
d. There were more than three rescuers.

The true story just isn't good enough!
The reality is that there was a rescue, people did carry others across, the handcart pioneers were really brave and suffered horribly.  Unfortunately, that isn't good enough for the LDS Church.  It has to make a story even bigger, more miraculous and make their leaders look really great.

So why does the church continue to present folklore as fact?


A sample of places on LDS.org where the false story is still repeated: