Birthplace of Every LDS Apostle Since 1916 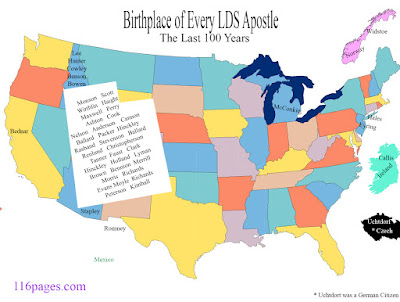 Summary:
In the past 100 years only three members  called to the Quorum of the 12 Apostles have been born outside of the United States.  Only ONE was not an American Citizen.

John Widstoe was born in Norway and immigrated to the United States when he was 10.

Charles Callis was born in Ireland and immigrated to the United States at age 10 as well.

Only Dieter Uchtdorf who was born in what is now the Czech Republic but as a German citizen wasn't an American when called to the Q-12.

With two vacancies in the Quorum of the Twelve after the deaths of Robert Hales and Thomas Monson, LDS Church members will excited to see who fills those spots.

Will there be the first truly Hispanic member?

Will Asia or Africa will represented in the Q-12 for the first time?

Will Nelson solidify his hard-line stance by calling very conservative men to the Quorum?

General Conference will be March 31 this year.