The Most Improbable Stories in the Book of Mormon

The Most Improbable Stories in the

Nephi told by the Spirit to kill Laban
1 Nephi Chapter 4
Nephi is a young man. He is told by the spirit to kill a drunk man in the street. He manages to cut off his head and put on Laban's clothes without getting blood all over them or getting spotted.
Can you imagine if everybody who had a voice in their head tell them to do something they did? What a great message to start the book with!

The Parable of the Olive Tree
Jacob Chapter 5

For 77 verses Jacob recounts the Parable of the Olive Tree. The issue with this story is that there were no olives in North or South America prior to Columbus. Jacob was a tiny boy when he arrived in the New World and would have never seen an olive.  By the time he tells this parable he is an old man and nobody hearing the story would know anything about growing olives.


A Bible, a Bible! The Catholic Church changed the Bible
1 Nephi Chapter 13
Nephi talks about the Great and Abominable Church and how they took the Bible and changed it. This was written at least 500 years before Jesus. All this would have meant nothing to the people of Nephi. For many years it was taught that the Great and Abominable Church was the Catholic Church. ... but now the Catholic and LDS Churches are friends and work together on together on multiple projects....and there is very little difference between the Bibles that the 2 churches use.

Building a Ship
1 Nephi Chapter 17
In one year Nephi and a few other adults mined ore, made metal, made tools, cut wood and gathered food and water.   They then built a ship that would carry them, their animals and all their families across the ocean for nearly a year.
Why was it different from the ship the Jaredites made? Did God know more about shipping building by then?


The Racism
Jacob Chapter 3
Some of Nephi's brother didn't keep the commandments so God made them have dark skin so they would be ugly.
The idea that God would curse a people and all their children for eternity for wickedness is absurd. Were the Germans cursed with a dark skin because of World War II? Are the descendants of Stalin cursed with blackness because of his atrocities?

So much talk of Christ
2 Nephi Chapter 25 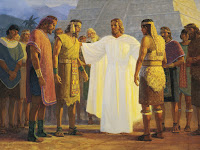 Realize that nearly the entire Book of Mormon tokes place before Christ was even born. The word Christ is used in the book about 200 times before he was born.  Why does it talk so much about him? Why does the Old Testament say nothing of Christ by name? What would have happened if Christ was born and didn't fulfill his atonement?

Craziness following the Death of Christ
3 Nephi 9
When Christ dies in Israel, God is so angry that he wreaks an unbelievable apocalypse in the Americas.  Earthquakes, tornadoes, tidal waves. Most likely millions are killed including children.  Why doesn't the Bible mention any of it? Why haven't we found any archaeological evidence of that sort of destruction?

Mormon and the Abridgment of the Book of Mormon
B of M Introduction
Mormon was a leader, prophet, father, general, warrior and was running from his enemies for most of his life. He had the time to abridge and scratch the entire Book of Mormon onto golden plates, and then Joseph Smith never really used them.

After the Tower of Babel (myth)  One family begged God to save them.  He helped them make some crazy barges to get to America.
The barges were part submarine, part ship with holes on the top and the bottom. Filled with people, food, water, bees and other animals and all their waste. They flip over in the water. Used to cross the oceans.  They used magic rocks for light.

Battle of Shiz and Coriantumr
Ether Chapter 15
The last battle of the Jaredites was fought between millions of soldiers whose only desire is destroy the other.  The last men standing are the two leaders - Shiz and Coriantumr. Nobody ran away, nobody surrendered everyone died.  At the very end, Shiz is beheaded and still rises up before he dies.  Coriantumr then wanders around until he stumbles upon another group of 500 BC Christians.

Ammon and the Lamanites
Alma Chapter 17
Ammon is a Nephite who agrees to be a servant for the Lamanite King.  As he is tending the king's flock and bad Lamanites come and try to steal the flock and kill Ammon.  God helps Ammon kill a bunch of the bad guys with stones and them amazingly Ammon cuts off the arms with one blow of several men who tried to attack him.
The sharpness of Nephite swords must have been perfect.  Too bad there is no evidence that there were ever swords in the Americas or sheep. 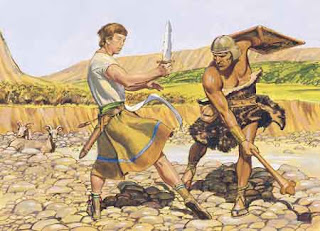 See Also - 10 Most Problematic Words in the Book of Mormon