Another Way the LDS Church is Racist

As a white male, I freely admit that my eyes are slowly opening to all the racist things that the LDS Church has done.  This one I had missed until now.

Temple Work for the Dead

For more than 40 years, I was taught that there are men and women in "Spirit Prison" who are suffering because they are waiting to have their temple work done.  There was an urgency to find names and get to the temple and do Baptisms for the Dead to relieve them of their suffering.

I had endless guilt as I imagined by ancestors, waiting, suffering and staring down at me, wondering why I was hanging out with friends or watching baseball while they were in this horrible state.

With a long heritage of Mormons in my family, we had to go further and further back into European Christian Church records to find names.  On all of my lines, we eventually hit road-blocks. Mostly in the 15th or 16th Centuries.  I felt guilty for those Great - Great - Great - Great Grandparents who were left to rot in Spirit Prison.

Because of slavery, colonialism, tribals wars and much more about Africa,  Asia and many other cultures including Native Americans, it is impossible to go back more than a few generations.

So once again, the White Europeans are getting their temple work done, while a good African or Native American brother and sister and suffering in Spirit Limbo - Land.   All that money, those huge elaborate $ multi-million temples are doing the work for WHITE People.

If it is so important, why can't God find those Africans and others who are ready to accept the gospel and make an Earthly printer start printing their cards?

I've had some crazier names I've been given in the temple, like E. S. - Mother. 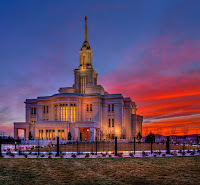 When I asked about my 14th century ancestors I was told that during the Millennium, all the names would be revealed and all that work would be done.  More guilt, more waiting, more anticipation that the Millennium would happen any day.

How many temples are there in Africa?  Six

I now know that the whole temple work thing is another way to keep us busy, paying our tithing and filled with guilt.

If there is a Heaven and there is a God, then everyone has a shot, and they aren't sitting in some "prison" waiting for a 12 year old to get dunked.