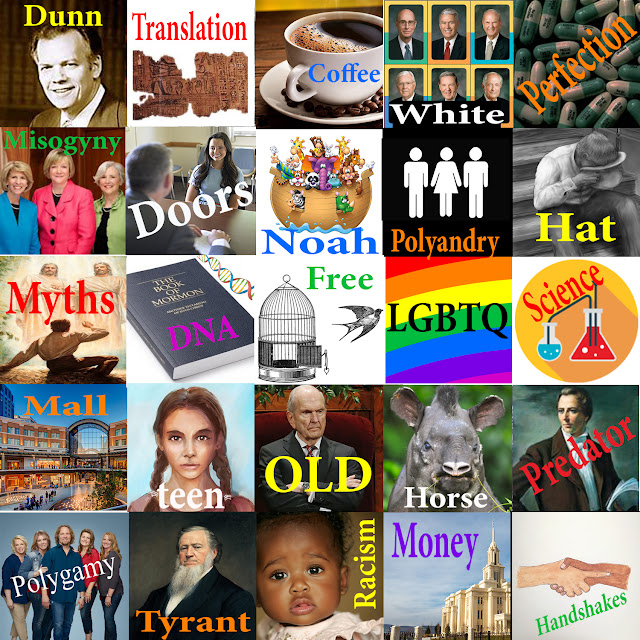 Glossary:
Dunn:
Paul H. Dunn told lies for years that went unnoticed by the "Prophets, Seers and Revelators" who were supposedly speaking to God.
Translation:
Several books and documents show evidence that Smith really couldn't translate.
Coffee:
Even with several health benefits, coffee will prevent a parent from seeing a child's marriage or participating in church.
White:
100 Percent of the Prophets and Apostles have been white.
Perfection:
Depression and suicide are unfortunate results of the expectation to be perfect.
Misogyny:
Women have been traded, abused, mocked and ignored throughout LDS history.
Doors:
Old men ask young boys and girls sexual questions behind closed doors.
Noah:
Mormons still claim a universal flood and a God that commits genocide.
Polyandry:
Joseph Smith sent men on missions and had sex with their wives.
Hat:
For 2500 years the Golden Plates were supposedly created, engraved and saved from destruction and yet Smith wrote the Book of Mormon by looking into a hat.
Myths:
Visits by God, Jesus and various angels have been made up years after the fact to support a narrative that the Mormon Church is special.
DNA:
The Book of Mormon story is continually disproved by a mountain DNA evidence as well as a lack of archaeology.
Free:
Knowing these truths will truly set you free.
LGBTQ:
Doctrines related to LGBTQ members demonstrate an uninformed and cruel leadership.
Science:
Ignored when convenient, embraced when supportive.
Mall:
Billions spend on luxury while children starve and suffer.
Teen:
Old men having sex with teenage girls and claiming that God commanded it.
Old:
Church leadership is out of touch with most of humanity.
Horse:
Making up excuses for serious anachronisms in the Book of Mormon.
Predator:
Joseph Smith stalked and raped young girls and married women.
Polygamy:
The Church will not admit the evil and abuse this doctrine is still causing.
Tyrant:
Brigham Young's lies, abuse and oppression are insidious.
Racism:
LDS doctrine and scriptures are still filled with racism today.
Money:
Billions of dollars and millions of hours are spent doing rituals that help nobody.
Handshakes:  Secret handshakes, costumes, oaths and chants show the Mormon Church is really a cult.